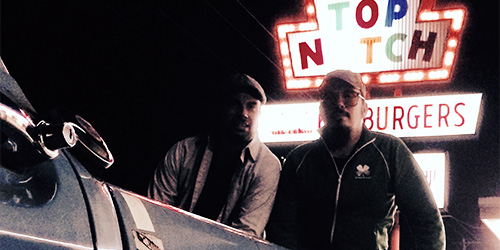 Alright, alright, alright! The Butler Brothers popped their SXSW cherry earlier this year and it was everything they imagined. The films, the panels, the parties, the people and the city were all as advertised and well worth the 32hr drive down from Hogtown. But the highlight was not actually a part of the SXSW extravaganza, instead it was whipped up by dynamite host and owner/operator of the Austin Bike Farm, Owen Weber, and it was awesome! It was a ‘Dazed and Confused’ tour of all the locations still around since filming in 1993. Bouncing around from the Centennial Liquor Store to the Emporium parking lot and around back to where O’Bannion gets paint dumped on him while cruising the streets like it was 1976 in the back of his ’64 Chevy pickup sealed the deal and made the Top Notch Burgers we washed it all down with even tastier.

If you haven’t been to SXSW or Austin, do it. And be sure to visit our bud at the Bike Farm and tell him the Butler Bros sent you.